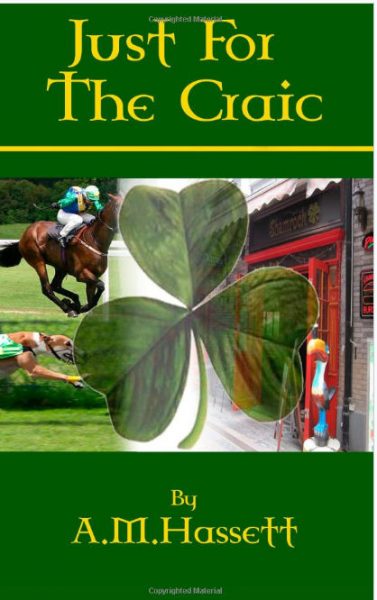 JUST FOR THE CRAIC

JUST FOR THE CRAIC (Pronounced crack) Gaelic word meaning the fun; the humour; the capers.

After the war, ‘The Paddies’ rebuilt England; they were everywhere, working to build housing estates, roads and motorways. No-one has ever written about them. This fictional story is dedicated to them.

The story centres around a group of first and second generation Irishmen, who are employed in the construction industry. Much of the action revolves around The Shamrock public house in Swindon. It is the watering hole, meeting place and homefrom-home for many of the characters. “The Shamrock” is admirably managed by the warm-hearted landlady Bridie and her amusingly idiotic, but tiresome, husband Jack. Donie Whelan is the central character, endearing, charming and a total ladies man. He is not opposed to the odd drink or two, or a flutter on the horses. In his own way a loveable rogue, his carefree attitude to life gets him into many an amusing scrape. Donie’s liking for the company of the fairer sex causes a lot of the hilarity, but also shows the sensitive side of his nature.

We meet such curious characters as The Monkey Fitzgibbon, who gets up to quite a few capers and delights us with his own unique entrance to the world of showbiz. There is Sean Hanratty, who has the ability to get drunk at every given opportunity, causing his friends to come to his rescue on many an occasion. We also meet the quiet, rather private, Willie Drippin’. When his life comes to an untimely end, a secret is unveiled which causes considerable intrigue amongst those who knew him, in particular, when a mysterious woman in black turns up at the funeral.

There are no reviews yet.

Be the first to review “JUST FOR THE CRAIC” Cancel reply